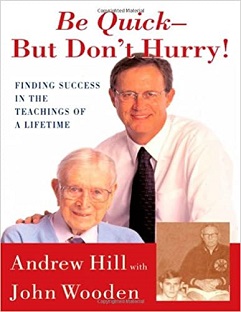 Andrew “Andy” Hill, 70, was born and raised on the affluent Westside of Los Angeles, just a stone’s throw from UCLA.  He loved all sports, especially baseball, but it was basketball where he shone.  He became an All-City high school guard, all the while idolizing UCLA and Coach John Wooden, and his desire to go to UCLA intensified once they won back-to-back national championships in 1964 and 1965.  Andy’s dream came true when he was recruited by the team, and he had a fabulous, achievement-filled freshman year.  But he was overlooked by Coach Wooden, who was known for playing no more than seven players, at least until the game was out of reach for the other side.  For the next three years, Andy played primarily meaningless minutes, which made him bitter and disappointed in his UCLA experience.  He also did not exactly endear himself to the Coach by being one of the most outspoken student-athletes on the team.

Following graduation and a brief career playing professionally in Israel, Andy was introduced to the production side of the entertainment industry and became president of two media companies, CBS Productions, and Channel One News.  In the 25 years following his 1972 graduation from UCLA, he had little if any contact with Coach Wooden.  But with time came perspective and the nagging question as to how and why he found such remarkable success in the entertainment industry, playing a significant role in the development of many successful television shows, including Touched by an Angel, Caroline in the City, Dr. Quinn, Medicine Woman, Walker, Texas Ranger, Dave’s World, and Rescue 911.

In 1997, Andy was reminded of his former coach while playing golf.  His playing partner advised him to "Don't hurry, get your balance", which evoked a Wooden maxim of "Be quick, but don't hurry."  Realizing that the Coach's teachings had subconsciously guided his life and career, Andy was inspired to contact him, and they developed a close friendship.  "Once we were away from basketball, from my thinking I should play more, I could see [Wooden] did care about me," he said.  Andy co-wrote "Be Quick—But Don't Hurry! Finding Success in the Teachings of a Lifetime" with Wooden, which became a bestseller.  The book describes how he applied his experience as a player under Wooden to achieve success in his career as a television executive.  His goal was to demonstrate the relevance of Wooden's coaching style to the business world.  The book also delves into his personal relationship with Wooden as his coach and mentor.

2021 represents the 20th anniversary of the publication of “Be Quick  - But Don’t Hurry.”  During these last 20 years, Andy has found success as a motivational speaker on leadership and life coaching.  In 2016, he was inducted into the Southern California Jewish Sports Hall of Fame.