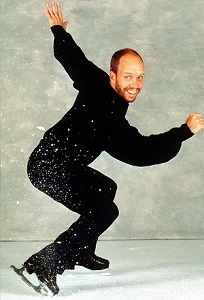 Born in Toledo, Ohio, and raised in nearby Bowling Green, Scott was two years old when he contracted a mysterious illness that caused him to stop growing.  After numerous tests and several wrong diagnoses, the disease began to correct itself.  Years later, it was determined that a congenital brain tumor was the root cause of his childhood illness.  At the peak of his amateur career Hamilton weighed 108 pounds and was 5 feet 2.5 inches tall, but eventually grew to a height of 5 feet 4 inches.

As with most elite figure skaters, Scott started at a young age. In 1976, however, he was almost forced to quit skating because the cost of training was too high, and he enrolled in college, attending Bowling Green State University in Ohio. Local benefactors stepped in to provide financial support for Scott to continue his training.

In 1980, Scott finished third in the U.S. Figure Skating Championships, earning him a place on the U.S. Olympic team.  He finished in fifth place at the 1980 Winter Olympics, where he also had the honor of carrying the American flag in the opening ceremony.  His breakthrough performance was in the 1981 U.S. Championship. He won that title and never lost an amateur competition again. In 1981 he won gold in the Worlds, winning gold again in 1982 and 1983 at the U.S. and World Championships.

At the 1984 Olympics, Scott won the gold medal and then turned professional.  He co-founded, co-produced, and performed in Stars on Ice for 15 years before retiring from the tour in 2001 (though he still returns for occasional guest performances).  He then spent many years as a skating commentator for both CBS and NBC television.

In 1997, Scott had a much-publicized battle with testicular cancer.  He returned to skating after his treatment and his story was featured in magazines and on television. Scott has since battled multiple episodes of a brain tumor and surgery complications, but it now seems he has beaten the odds.

In 2020, Scott launched the podcast “Live Your Days,” a call to being present and to recognize that none of us can control our number of days, but we can control what we do with those days.

Today, Scott Hamilton inspires others as a speaker, humanitarian, and cancer and pituitary brain tumor survivor.