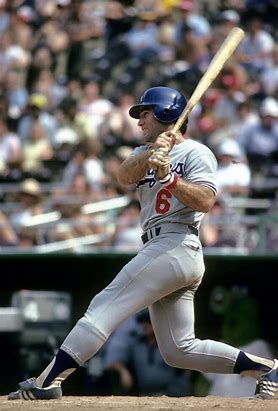 Steve finished his major league career with a .294 lifetime batting average, 272 home runs, and 1308 RBI.  From 1973 to 1981, he was part of the iconic and record-setting infield for the Dodgers that stayed together through all those years:  Garvey at first, Davey Lopes at second, Bill Russell at shortstop, and Ron Cey at third; a total of 8 ½ years.  Steve is one of only two players to have started an All-Star Game as a write-in vote, doing so in 1974. That year he won the NL MVP award; registering his first of six 200 hit seasons. Only 16 players in all of Major League Baseball history have had six or more 200 hit seasons (as of the end of 2017).

After signing with the San Diego Padres in 1983, he had that rare and mythical “second act” when in 1984, Steve won his second NLCS MVP award and led the Padres to their first National League title over the Chicago Cubs.  In Game 4 of that Series, he capped off an incredible game with a two-run walk-off home run.  1984 was also the year when he set a record as the only first baseman in major league history to commit no errors while playing 150 or more games.

Steve officially retired from the game in 1988 at the age of 39 and was inducted into the Dodgers team hall of fame, Legends of Dodgers Baseball, as part of their inaugural class in 2018. In 1983, he started Garvey Media Group while playing baseball for the San Diego Padres. Steve has continued his active involvement in various media and broadcasting endeavors, serves as a Board Member for the Baseball Assistance Team, is a motivational speaker for corporate events, and as a prostate cancer survivor is the Chairman of the Board of Directors for “Fans for the Cure.”