LA Dodgers and The City of Hope 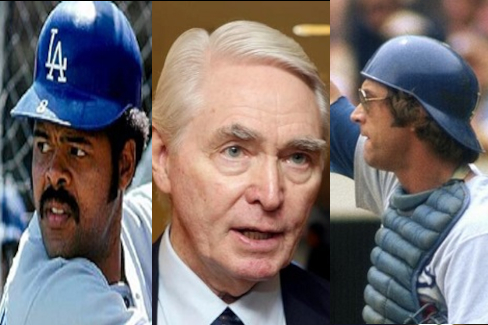 The Dodgers Way to Play Baseball was once a best-selling sports book, but 'The Dodgers Way' remains a hallmark of one of the most successful sports franchises in history.  Their former General Manager and architect of the 1988 Cinderella World Series Champion Dodgers, Fred Claire, discovered another team for the ages when he won the battle of cancer at The City of Hope. Joined by two great Dodgers, Reggie Smith and Steve Yeager, these three baseball lifers talk about their Dodgers days as the After the Glory team pays tribute to The City of Hope.

Fred Claire was an integral part of the Los Angeles Dodgers from 1969 to 1998, leveraging a successful career in sports journalism to start as Vice President of Public relations for the team, and was instrumental in creating the Dodgers brand of 'Think Blue',  He began his 10-year run as General Manager in 1987 and famously built the legendary 1988 Dodgers World Series Championship team.  Below, in an excerpt from his recent book entitled Extra Innings: Fred Claire's Journey to City of Hope and Finding a World Championship Team (co-authored with Tim Madigan), he movingly describes the greatest battle he ever had to face - cancer.

From Bill Plaschke of the L.A. Times, words that led the Dodgers to do what was long overdue; honor Fred Claire on June 10, 2017:  “…The echos of Dodger Stadium will always include him because Dodger history was forever changed by him.  In a dramatic reversal unmatched in franchise lore, the former sportswriter weaved a classic comeback tale that stabilized a franchise, immortalized a manager, and helped turn lost souls into champions.”  Later in 2017, after immunotherapy seemed to have worked, in what his doctor called a miracle, Fred said this:  “When people would ask, ‘How are you, Fred? I would say “I’m blessed, he said in 2019.  “I didn’t say that when I was in my seventies and healthy before cancer.  I would say, ‘I’m great.’ But I knew what had happened.  I was aware of the blessing that I had received. Immunotherapy is the only reason I’m here today. The treatment of cancer by cutting, burning, and poisoning is going to be surpassed, thank the Lord, by science and medicine, which is the whole theme of the City of Hope. That’s really what we’re talking about here, why we’re trying to shine a light on all this.”

Reggie Smith was one of the most talented and respected outfielders in baseball, enjoying a 17-year major league career from 1966 to 1982.  He was raised in the Los Angeles area and drafted by the Boston Red Sox in 1966, where he was part of their 1967 World Series team in his rookie season.  Reggie went on to success with the Red Sox through 1973, with Hall-of-Famer Ted Williams as his inspiration.  He came back home to join the Dodgers from 1967 to 1981, during which time he appeared in three World Series (1977, 1978, and 1981), the last one resulting in a World Series Championship.  Aside from being a stellar outfielder with one of the great arms in major league history, it was hitting that made him famous and led to his continued involvement in the game once his playing career was over.  Reggie has taught hitting to USA Olympic baseball players, spent years with the Dodgers at all levels of their minor league system, and established a renowned hitting academy in Encino, CA.

Steve Yeager, one of the greatest defensive catchers in all of baseball, was considered by Hall-of-Famer Lou Brock as the best throwing catcher he ever saw.  He played 14 of 15 of his major league seasons for the Dodgers, where he was known as a leader and clutch hitter.  Steve played for the Dodgers from 1972 to 1985 and was part of the World Series teams of 1974, 1977, 1978, and 1981, being named co-MVP of the 1981 World Series.  After his playing days, he remained with the Dodgers as a minor-league instructor and catching coordinator for the team from 2012 to 2018. Steve has coached and managed in the Independent Leagues and continues to be a popular Dodger wherever fans gather to discuss the great Dodgers of the past.  Outside of baseball, he is fondly remembered for his role in the iconic movie “Major League” and is co-owner with his wife Charlene of a Jersey Mike’s franchise in Granada Hills, CA.