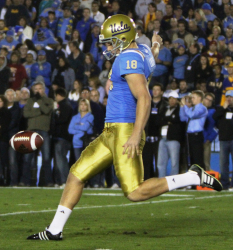 Jeff Locke got hooked on punting while in high school after attending a camp run by former NFL punter and Hall of Famer Ray Guy.  He attended high school in Arizona and played football as a punter, kicker, and wide receiver.  As a senior, Locke was recognized as an elite punter and field goal kicker, earning the top spot as the number one kicker in the nation coming out of high school.

Locke attended UCLA and played all four of his college years with the Bruins from 2008 to 2012.  He made 53 career starts with a punting average of over 44 yards per kick, the all-time number two for the Bruins, and also had a 42.54% touchback rate on kickoffs.  In 2011, he took over field goal and extra point duties for a few games following an injury to UCLA's starting placekicker.  He went two for three on field goals, connecting from 49 and 51, as well as converting six of nine extra-point attempts.  In his senior year, Locke was named first-team All-Pac-12, earned first-team all-conference academic team honors, was selected to play in the Senior Bowl college all-star game, and earned the Captain's Award.

He graduated from UCLA with a grade-point average of 3.885 and a bachelor's degree in economics.  While at school, he researched athletic scholarships and helped his teammates set up personal budgets.

Locke was drafted in the fifth round of the 2013 NFL Draft by the Vikings, making him the highest-picked punter in franchise history.  He was also noted for his kickoff abilities, having led the NCAA in touchbacks in his senior year.

After competing with the Vikings' then-current punter, eight-year veteran, and fellow Bruin alum Chris Kluwe, Locke earned the starting job when Kluwe was released in May 2013.  He remained the Vikings starting punter through the 2016 season, then continued his career for two more years with the Colts, Lions, and 49ers.