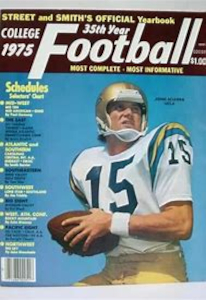 John Sciarra, soon to be 68, played and starred as a college football quarterback at UCLA (1972-1976), then as an accomplished wide receiver in the Canadian Football League (1976-1977), followed by success as a safety in the NFL with the Philadelphia Eagles (1978-1983).  During his pro football career, John was that rare athlete who also found success in the business world.  In 1977, he established a career in qualified retirement plan administration as a Third Party Administrator (TPA).

John was born in Los Angeles, CA, and attended Bishop Amat Memorial High School, where he was a National Honor Society student, and excelled in both football and baseball.  After graduating from high school, he was heavily recruited by major college football and baseball programs and was also drafted in the third round by the Cleveland Indians to play professional baseball.  Ultimately John chose to attend UCLA, where he graduated cum laude in 1976 as one of four outstanding seniors to be honored for overall excellence and achievement and was a member of the Student Legislative Council in 1974.  He was the quarterback for the Bruins from 1972 to 1976 and was named a consensus All-American in 1975.  John starred in the 1976 Rose Bowl game in which UCLA upset favored Ohio State, which was unbeaten and ranked number one in the nation, by a score of 23–10, and was named Most Valuable Player in the game.  He ran for the most career yards by a quarterback in UCLA history.

After graduating from UCLA in 1976, John played for two seasons in the Canadian Football League, followed by six years in the NFL with the Philadelphia Eagles, where he was coached by his college coach and mentor, the great Dick Vermeil.  Those six years found him playing defense back and punt returner.  He was named Most Valuable Player for Special Teams in 1979 and 1980, the NFC Punt Return Leader in 1979, and was named Captain of the Special Teams in 1982 and 1983.  The Eagles won the NFC Championship in 1980 and played in Super Bowl XV.  John’s athletic success led to his induction into the Rose Bowl Hall of Fame, the UCLA Athletics Hall of Fame, and the College Football Hall of Fame.

John Sciarra is currently a business consultant and conference speaker for a wide range of businesses and industries.  He and his wife Michele married in 1977, and together they have three children and six grandchildren.