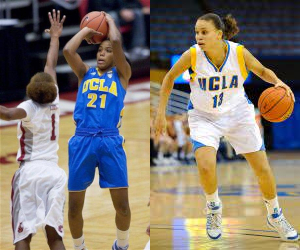 Rachael Doreena Campbell, 32, hails from an American military family.  Born in Germany, she eventually made her way to Virginia, where she was a standout in basketball, earning multiple inquiries from American universities.  She chose UCLA and became a star, but always with her eye on a career in medicine after college.  Doreena finished her high school experience at Edison High School as fifth all-time in scoring and second in assists.  For the Bruins, she was a four-year starter and one of the greatest all-around players in school history.  Her last two years at UCLA resulted in back-to-back first-team All Pac 10 selections.  Doreena is one of only four Bruin ladies to reach the 1000-point, 400-rebound, 400-assist plateau.  She finished her UCLA career in the Top 10 in free throw percentage, field goal percentage, assists, and three-point field goals made.  Today, Dr. Rachael D. Campbell is an accomplished military physician, presently assigned to Marine Base Camp Pendleton in Oceanside, CA.

Erica Tukiainen, according to a 2012 article on the Bruin Athletics website, did not travel a path considered traditional or normal.  Born and raised in Finland, she and her family came to Los Angeles in 2000, with Erica and her brother Daniel not speaking a word of English.  Hard work and dedication led her to be part of the UCLA Class of 2012, graduating with a major in French, then on to UCLA Medical School, and today she is part of the Sports Medicine Department at Kaiser Permanente’s Los Angeles campus.  Erica was the first UCLA womens’ basketball player to go on to medical school.  Her sports career at UCLA was, like Doreena's, filled with multiple honors and a place among the elite in the sport at UCLA.

Both of these amazing elite athletes had opportunities to play professional basketball but realized early on in life that the talent, drive, and ambition that led them to starring roles on the UCLA basketball team would lead to success in the world of medicine.  Today, they are among the best and brightest in the field of health care.  We are proud to share a stimulating conversation with two UCLA greats, Doreena Campbell and Erica Tukiainen.