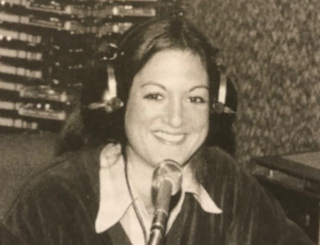 Jennie Paul Gardner’s story, told in the book The Yankee Princess, is a fascinating account of life as the daughter of a dedicated and accomplished baseball man, former Cincinnati Reds general manager and New York Yankees owner Gabe Paul.   An experienced sports reporter in her own right, Jennie is a keen observer whose unique view, combined with never-before-seen excerpts from her father's diaries, gives a new perspective on the tumultuous world of 1970s Yankees baseball.  Her struggle to find her place in that world - and in her father's life - is played out on the field known as "The Bronx Zoo."  The Yankee Princess is for every father who wants to be closer to his daughter, and for every daughter who lovingly tries to understand her father.

Like her dad, Jennie is self-made.  She was the first woman in the Washington Post’s sports department and worked at the Dayton Daily News in the 1970s as a sports columnist and beat reporter, covering baseball, football, hockey, tennis, bowling, and high school sports.  She then became a sports broadcaster, working for WCPO and WLW in Ohio, where she covered the Cincinnati Reds, Bengals, the Kentucky Derby, and the Indy 500.  Later, in New York City, Jennie worked at CBS for Phyllis George and at NBC Sports with Bryant Gumble.  She moved on to Boston, and, while her Dad was running the New York Yankees, she became the first woman in the nation to do a sports trivia radio show on the Boston Red Sox station, WITS.

When Jennie was denied assignments overseas, she became a freelance journalist and had the chance to cover Wimbledon and the Maccabiah Games, going on to write well-received features for The Sporting News.  She eventually realized how influential, and at times frustrating, her relationship with her father was, especially during those difficult years with the Yankees.  The journey of their relationship resulted in the publication of her book, The Yankee Princess.  Through Jennie’s story, we learn that, unlike in “The Field of Dreams”, baseball is a sport for fathers and daughters, as well as fathers and sons.