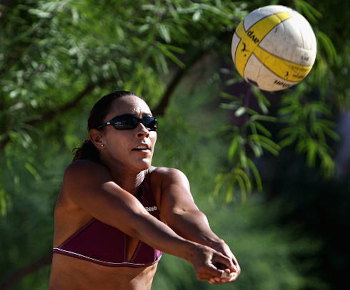 Former Bruin standout and Olympian Jenny Johnson Jordan is now in her eighth season with the UCLA beach volleyball program.  She served the first seven years as an assistant coach and was promoted to associate head coach on July 13, 2020.  She is one of the newest members of UCLA’s Hall of Fame, inducted on October 5, 2018.  Jenny has won a national title as both a player and a coach, helping the Bruins to their first-ever NCAA Beach Volleyball Championship in 2018 as UCLA went 40-4 on the season.  She then guided the Bruins in winning back-to-back NCAA titles on May 5, 2019 (35-3), and was named the AVCA National Assistant Beach Coach of the Year a few days later.

Jenny played with the Bruins from 1991 to 1995 and was a two-time team captain for the women's volleyball team (1994-1995).  She was a member of the 1991 UCLA National Championship squad and the NCAA runner-up teams from '92 and '94, earning All-Tournament Team honors in 1994.  Jenny earned a pair of Volleyball Magazine All-American Honorable Mention accolades in ‘94 and '95, was a two-time All-Pac-10 Conference First Team honoree ('93 and '95), and a two-time Pac-10 All-Academic selection.

Following her playing days at UCLA, Jenny played on the beach, competing on the sport's grandest stage. In 2000, with partner and former Bruin Annett (Buckner) Davis, she finished fifth in the Sydney Olympic Games.  She also served as an alternate for the 2004 Athens Games, and during that year with Davis, became just the second team in the world to compete in 100 events together.  Elsewhere on the beach, Jenny has played on the Pro 4's, FIVB, WPVA, BVA, and AVP Tours.  In 1997, she won the FIVB 4-Person World Beach Championship at UCLA, winning a Silver medal at the FIVB World Championships two years later.  As a winner of 10 professional beach titles worldwide, she ranked in the Top 10 in points every year she competed on the BVA and AVP Tours and was honored in 2002 with the AVP Special Achievement Award.

Jenny, who graduated from UCLA with a bachelor's in communications in 1996, comes from a rich tradition of Bruins and athletic pedigree.  Her father, Rafer, was an Olympic Gold medalist in the Decathlon in 1960 and a Silver medalist in that event in 1956.  Her mother, Betsy, also attended UCLA, as did her brother Josh, a former javelin thrower, and uncle Jimmy, a former football player who went on to a career with the San Francisco 49ers and is a member of the NFL Hall of Fame.  She is married to former UCLA All-American wide receiver Kevin Jordan (class of '95). They have two children, Jaylen and Kory.