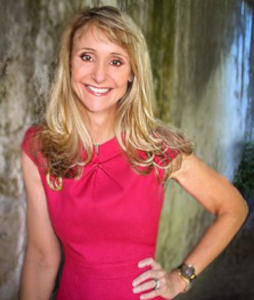 Nancy Hogshead-Makar is one of the most accomplished women in America.  She was one of this nation’s premier swimmers in the 1970s into the 1980s, culminating in the 1984 Olympics in Los Angeles, California, where she won three gold medals and a silver.  Nancy went on to graduate from Duke University and the Georgetown Law Center, becoming an accomplished lawyer who eventually a taught law and advocated for the full promise of Title IX, the landmark law that revolutionized women’s sports and gender equity throughout athletics.  Perhaps the highlight of her career was in 2012 when Nancy began working on legislative changes to assure club and Olympic sports athletes were fully protected from sexual abuse.  In 2018, with her tireless advocacy, the Protecting Young Victims from Sexual Abuse and SafeSport Authorization Act was finally enacted.

Nancy is from Iowa, but her family moved to Florida shortly afterward.  When she was 11 years old, her family moved to Jacksonville, Florida, where she would meet coach Randy Reese and be exposed to a team oriented towards Nationals.  By age 12, she had qualified for the U.S. Senior Nationals and thereby began her record-setting swimming career.  Nancy qualified for the 1980 Summer Olympics in Moscow in the 200m butterfly and the 400m individual medley, but the American-led boycott kept her home.

At the 1984 Summer Olympics in Los Angeles, she won three gold medals and one silver medal, becoming the most decorated swimmer at the Games.  Nancy had already been attending Duke University and so returned to Duke to finish her undergraduate degree in 1984, going on to obtain her law degree from Georgetown.

Early on, Nancy interned at the Women’s Sports Foundation, which had a strong influence on her career direction.  She has worked at WSF for thirty years, serving on the board of trustees from 1987 to 1993 and as its President from 1993 to 1994. She was their Legal Adviser from 2003–2010 and their Senior Director of Advocacy from 2010–2014.

From 2001 – 2013, Nancy was a tenured professor on the faculty at Florida Coastal School of Law in Jacksonville, where she taught first-year torts and sports law courses, including "Gender Equity in Athletics."  She has testified in Congress numerous times and has served on two Presidential committees on gender in sports.  In 2007, she co-edited the book Equal Play; Title IX and Social Change with economist Andrew Zimbalist.

Nancy has written numerous scholarly and lay articles. She is widely quoted and interviewed on topics related to gender equity, including participation, treatment, scholarships, sexual harassment and assault, and pregnancy discrimination.