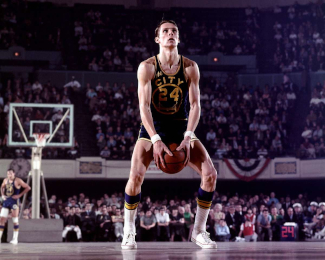 Basketball legend and patriarch of the First Family of Basketball, Mr. Rick Barry was born March 28, 1944, in New Jersey.  At 6’7” and 205 pounds, he was considered a small forward but played the game with speed, physicality, and skill virtually unmatched for his time.  His first love was baseball and he idolized Willie Mays, wearing his number 24 for most of his career.  Rick was an all-state baseball player in New Jersey, but soon basketball took over.  He attended the University of Miami from 1962 to 1965 and was a first-round draft choice of the San Francisco Warriors of the NBA.

He went on to an historic pro career from 1965 to 1980, playing for the Warriors until 1967 when he became one of the elite players that joined the fledgling ABA in 1968.  Rick then played for the Oakland Oaks/Washington Caps from 1968-70, and the New York Nets from 1970-1972.  His move to the ABA challenged the pro basketball version of the “reserve clause” long before Curt Flood took his case to the Supreme Court.  Those actions were instrumental in expanding the rights that pro basketball athletes enjoy today.  Rick returned to the NBA to his old team, now the Golden State Warriors, for the rest of the 1972 season, staying with them through 1978.  He finished out his playing days with the Houston Rockets, retiring in 1980 at the age of 36.

Rick is a member of the Naismith Memorial Basketball Hall of Fame and the College Basketball Hall of Fame.  Among the many honors earned during his illustrious career, he was named the 1965-66 Rookie of the Year, the 1967 All-Star Game MVP, was a 12-time All-Star (eight NBA, four ABA), five-time first-team All-NBA, four-time first-team All-ABA, and was MVP of the 1975 NBA Finals.  Rick has the distinction of being the only player to ever lead the NCAA, the NBA, and the ABA in scoring for a season.  His number has been retired by both the Golden State Warriors and the Miami Hurricanes.

Rick was known for doing things his way while being the consummate team player who played the game the way it was designed to be played.  He paved the way for the dominant forward in professional basketball and sought only to give 100% every time he stepped onto a basketball floor.  He was one of the greatest free-throw shooters in basketball history.  His unorthodox underhand style resulted in a career 90% success rate, one of the all-time best in free throw percentages.  At 77, Rick remains a passionate supporter of pro basketball and is now involved as a coach in Ice Cube’s BIG3 3x3 league that has introduced classic basketball to a new generation of fans.