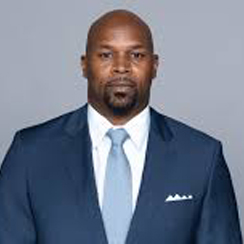 Roman Phifer was a championship linebacker in the NFL for 15 seasons and now serves as an Area Scout for the Detroit Lions. He was an All-American at UCLA and then was drafted by the Los Angeles Rams in 1991.

Following his playing career, Roman worked as an assistant linebackers coach with the Denver Broncos, where he spent two seasons (2009-10). He then served as UCLA's Director of Player Development from 2016-17.  In 2009, Roman produced the acclaimed documentary “Blood Equity,” which chronicles the hardships and struggles of life after football.