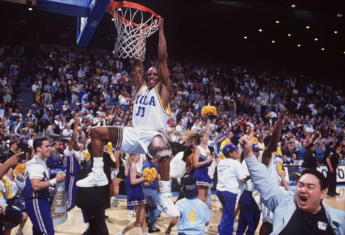 Tyus Edney, now 48, was a 5’10” point guard who had an amazing career at UCLA and success in pro basketball in both the NBA and Europe before becoming a coach, teacher, and ultimately, an important member of the UCLA Athletic Department.

Tyus played for the Bruins from 1991 to 1995, culminating in the 1995 “March Madness” National Championship.  He will always be fondly remembered by the UCLA faithful for his mad dash, 4.8-second layup against Missouri to win that game and inspire the Bruins to go on to win their first NCAA Championship after the John Wooden era.  He was the Bruins’ MVP in his sophomore season, a member of the All-Pac-10 Conference team in 1994, and the co-MVP with Ed O’Bannon in 1995.  Tyus also won the Naismith Award as the nation’s best player under 6 feet tall in 1995, and in 2009, was inducted into the UCLA Athletics Hall of Fame.  He ranks second in school history in career assists and third in steals.

Tyus was a second-round draft pick of the NBA Sacramento Kings, where he played two seasons and was named to the NBA All-Rookie Second Team.  After a year with the Boston Celtics and two years in Europe, he returned for one more year with the Indiana Pacers.  Tyus is that rare player who won championships both in college and in the EuroLeague.  He returned to Europe and had a successful career with various teams before finally retiring from active play in 2010.  He was one of the most popular American players ever during his career in Europe.

Tyus returned to his Alma Mater in 2010 as Director of Basketball Operations under Coach Ben Howland.  He later served as an Assistant Coach under Steve Alford and today is the Director of Engagement with the UCLA Athletic Department.