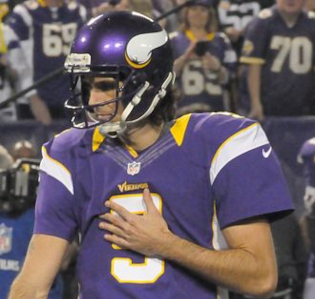 Chris Kluwe is from Southern California, where he played football at Los Alamitos High School and was honored as a 1999 USA Today high school All-American.  He went on to play at UCLA as one of the top punters in the Pac-12.  This was followed by a long career in the NFL, spending one year with the Seattle Seahawks, signing as an undrafted free agent, on to eight years with the Minnesota Vikings, and then a year with the Oakland Raiders.

Chris was an elite punter with the Vikings, setting many team records along the way.  But he became widely known during those years (2005-2012) as a social activist, especially when it came to gay rights and same-sex marriage.  This led to tension between Chris and the Vikings coaching staff, which eventually led to his departure from the NFL.  He was first released by the Vikings, then released after his year with the Raiders. He was not ready to retire, having a lot left in that right leg, but no one would sign him.  He made the difficult decision to retire from pro football in 2013.

Chris did not allow his experience to get the better of him.  He pursued a writing career and became a widely respected humor columnist for the sports website Deadspin. He and his wife Isabel had their first daughter in July 2008, and their second in 2010.  Chris is an avid participant in “e-sports” and a bass player in an alternative and progressive metal band, Tripping Icarus, where he has played since 2009.

He has written a book, Beautifully Unique Sparkleponies (Little Brown & Co.), a collection of essays on various topics, released on June 25, 2013.  Chris also co-wrote a book with Andrew Reiner, entitled Prime: A Genesis Series Event (Volume 1), the first in a planned science-fiction trilogy.  His first novel written solo, Otaku, was published in March 2020.