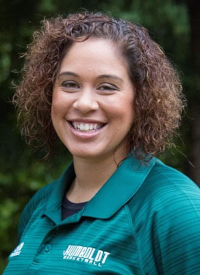 A native of Pasadena, CA, Megan Hankins-Maldonado played her college ball at Notre Dame de Namur in Belmont, CA.  During her senior season, she held the record for the most rebounds in a single season (averaging eight rebounds per game) and received the Argonaut Award, which is given to the team's hardest worker.  She received her bachelor’s degree in psychology from NDNU in 2003, and a master's in clinical psychology, marriage, and family therapy in 2006.

That she attended a school like NDNU requires an explanation:  NDNU strives not only for excellence in academics but also to challenge its students to be extraordinary forces for change in the community.  This is accomplished through a variety of community-based learning programs that redefine the concept of “hands-on” learning and connect students with programs that allow them to make positive contributions to the community.  Its students are active outside of the classroom in more than 30 student organizations covering academics, ethnic concerns, sports, professional, social, and service groups.  That is exactly the academic and sports environment Megan Hankins-Maldonado and her parents were searching for when it came time to select a college to attend.

Megan's basketball coaching career began with the College of San Mateo, where, in her third season as an assistant coach with the Bulldogs, the all-freshman-led team advanced to the regional playoffs for the first time in California history.  She went on to become the Video Coordinator with Division 1 University of San Francisco for two seasons, as well as to an assistant coaching position with Cal State Monterey Bay, where the Otters made Round 32 in the 2011 NCAA Tournament.  Her first head coaching assignment was at Hillsdale High School in San Mateo.  Megan then distinguished herself as the Head Coach of De Anza College in Cupertino, CA, securing the best win-loss record for a rookie head coach in the CCCAA in her first season, and was hired as the assistant coach for the Humboldt State women’s basketball program in 2016.

But her passion is as a therapist for coaches and athletes.  During the pandemic, Megan found that her skill set was especially vital to many in the world struggling with the absence of sport:  “Now and again life can throw us curve balls.  Athletics has been hit hard by the pandemic and has left many sad and not knowing where to turn.  As an energetic, committed, and lighthearted therapist (and true coach at heart), my approach is both collaborative and encouraging.  I work with athletic coaches, athletes, and parents who are struggling without sports at this time. This could look like sadness, isolation, anxiety, anger, lost interest, and unmotivated.  I offer a safe, honest, nonjudgmental, and compassionate space. I truly love watching from the sidelines as you make life changes to improve your overall well-being.  I utilize an array of approaches that are based on the need of the situation presented.  With experience as a head basketball coach, assistant coach, and student-athlete, I truly understand the stress and pressure to be "OK" when things truly don't feel that way.  My eclectic style gives me the flexibility and readiness to approach your concerns head-on.”

Megan and her husband Dan Maldonado married in May of 2016, have two children, Uriah (4) and Amara (2), and reside in Eureka, CA.