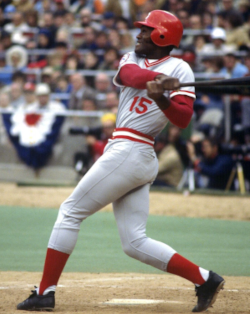 George Foster, now age 72, was born in Alabama but grew up in Southern California.  He was drafted by the San Francisco Giants after a year in junior college, playing three minor league seasons before enjoying a major league career spanning from 1969 to 1986, most famously as a key member of the “Big Red Machine” Cincinnati Reds dynasty between 1970 and 1976 that won 4 NL pennants and 2 World Series titles.  His career also included stints with the S.F. Giants, New York Mets, and Chicago White Sox.

Mr. Foster was a 5-time All-Star and one of the most feared home run hitters of his era, leading the NL in home runs in 1977 and 1978, and in RBIs in 1976, 1977, and 1978.  He was the National League MVP in 1977 with the Reds, and in 2003 was elected to the Cincinnati Reds Hall of Fame.  In 2002, he was elected to the Alabama Sports Hall of Fame.  His 1977 MVP season was one for the ages.  On September 23 of that season, Mr. Foster hit his 50th home run of the season, making him the first player since Willie Mays in 1965 to hit fifty in a season, a feat that would not be accomplished again until 1990.  He was just the 10th player in major league history to reach that mark and the first-ever Cincinnati Reds player. His 149 RBIs that year also led the majors.

Mr. Foster's 1986 season with the New York Mets was memorable, as it saw the growing maturation and concern he had developed for his place as a role model.  During a nasty bench-clearing brawl with the Reds and Eric Davis, the one player who remained out of the ruckus was Mr. Foster, who was then quoted as saying he did not want to set a bad example for kids.  Perhaps not coincidentally, he lost his everyday job in left field soon after.  In mid-August, 1986, he was released by the Mets, picked up by the White Sox but then released again in September.  1986 was the Mets’ year, and in a great show of class, after the team won it all in 1986, they awarded Mr. Foster a World Series Ring and a ¾ share of the World Series bonus money.  In an 18-season career, he ended up with a .274 lifetime average, 348 home runs, 1,239 RBI, and a .984 fielding percentage in all three outfield spots.  He was at his best in the playoffs and the World Series.

During his playing days, Mr. Foster spent time with young baseball players, giving them equipment and instructing them on batting.  Dayton, Ohio, sportswriter Hal McCoy, who covered Mr. Foster when he was with the Reds, called him “the greatest person in baseball,” adding, “I mean as a person, not just as a player.  He never raises his voice, no matter how harassed he may be by fans.  I asked him once if he’d let me use his name for Building Bridges, an organization for underprivileged kids.  He said, ‘No, you’ll have more than my name.  I’ll be there too.’ ”

Now retired, he hosts an online radio show, “The George Foster Diamond Report”, in which he speaks about how the development and strength of an athlete can build a strong foundation and lends out his skills as a motivational speaker.  He spends time instructing youth in baseball techniques and seeks to teach future ballplayers to work hard and believe in their abilities through a baseball training organization called the George Foster Baseball Clinic.  He operates a non-profit organization that supports children of military families and who live in inner-city neighborhoods.  He also sponsors baseball boot camps for children and a Cincinnati select baseball team, Foster's Force.